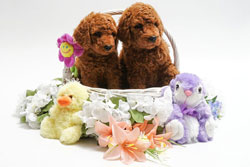 I started breeding dogs more than 45 years ago when I was 10 years old, starting with rare black German shepherds. Over the years I have raised many types of farm animals. I became interested in the Red Standard Poodle line and began a breeding program 15 years ago. I have been hybridizing flowers for more than 25 years and have named and registered more than 825 Daylilies. One of the biggest breeders in the world. You can view my creations at www.HEAVENLYGARDENS.com. Our first standard poodle joined our family in Oct of 1997. He was cream in color. We enjoyed his companionship till he passed in 2007. Zackary and Zena came to our family in Oct of 2010 from a wonderful breeder in Canada. They have a wonderful temperament and a genetic history of red breeding. We have kept two of the kids, Zoey and Zandra, from Zachary and Zena. We added a new male, Roscoe in November 2014. We have been breeding him with Zoey and Zandra. We have used the best genetics available to produce some of the finest dark red standard Poodles.


Because a puppy is a financial and emotional investment, we pride ourselves in testing and select the proper mate to produce the healthiest puppies possible thereby increasing the value of our breeding program. Our parents have been tested for known genetic inherited diseases and genetic traits. For the poodle, we test for the following poodle genetic inherited diseases and genetic traits. They are #1 Degenerative Myelopathy-Aliases: Canine degenerative myelopathy, DM #2 Neonatal Encephalopathy with Seizures-Aliases: NEWS #3 Progressive Retinal Atrophy, Progressive Rod-Cone Degeneration-Aliases: PRA-PRCD, PRCD #4 Von Willebrand Disease I-Aliases: Pseudohemophilia, Vascular hemophilia, von Willebrand disease type 1, von Willebrand's disease, VWDIllebrand's disease, VWDI. Our Poodle puppies are all clear of these inherited diseases and genetic traits.